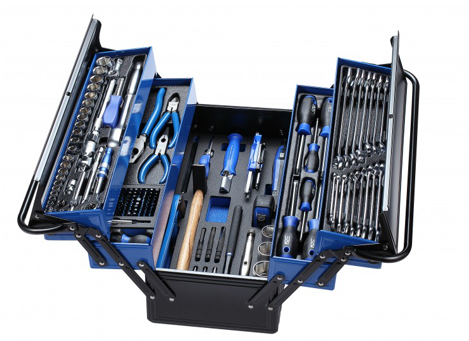 Description of the Configurator

See the picture below for an overview of the screen: 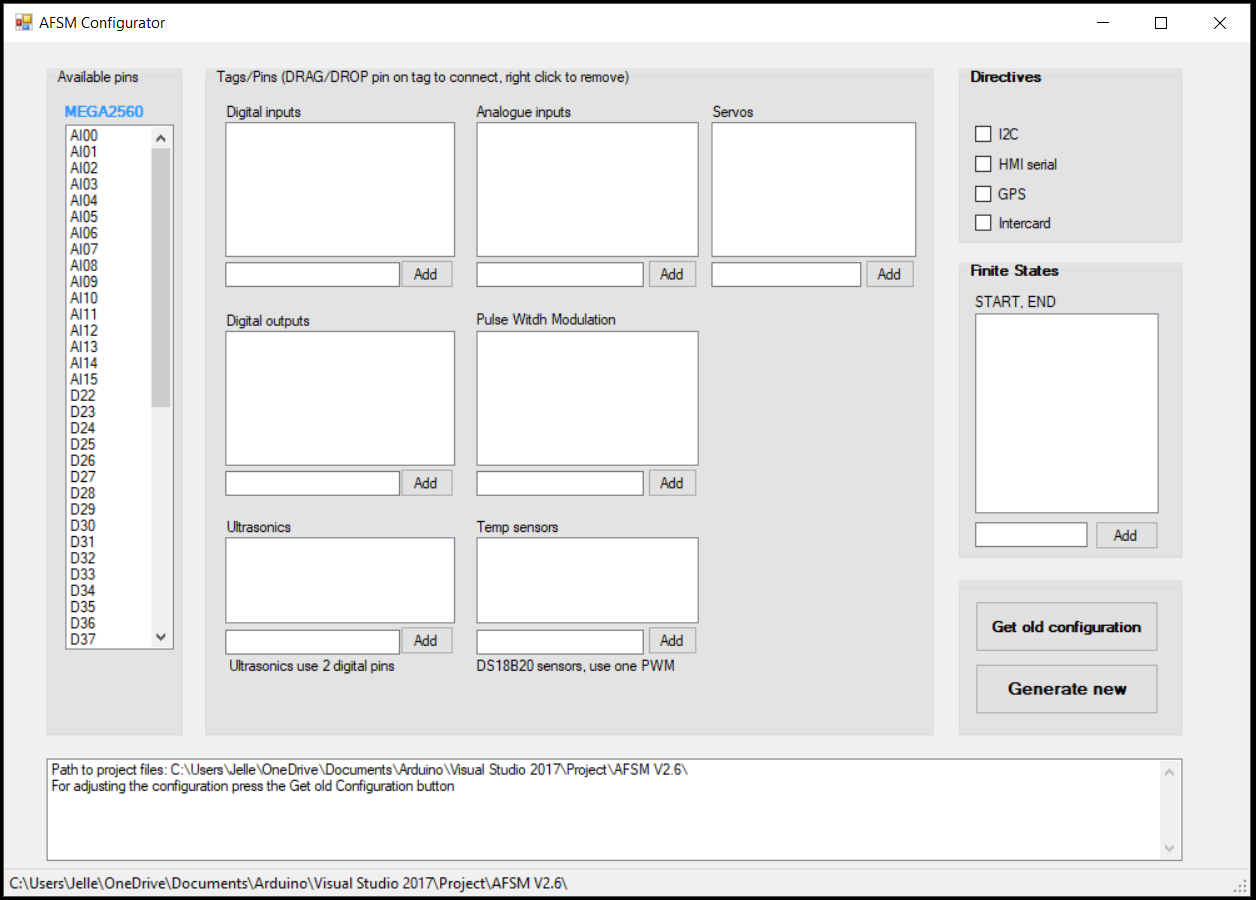 The configurator can be started in Visual Studio when the project of choice is opened. It is also possible to get the executable from the project folder (release or debug version). Click here for more information about the executables.

With the "Get old configuration" button, the actual project data is fetched and presented in the boxes. Once the button is pressed, it is deactivated. When all changes are made in the configuration, press the "Generate new" button. The UserConfiguration.h and the UserFiniteStateMachine.h files are rewriten.

Be aware of build and upload the sketch to the connected 2560MEGA board after saving the new writen files.

As you can see, with the configurator you can define all predefined I/O types of the AFSM. Specials are the ultrasonics, 2 Digital pins have to be coupled and for the temperature sensors, the DS18B20 is supported via just one PWM pin. In general the working of the configuration; input a TAG name for the I/O point in the text field located under the specific I/O type and press the "Add" button. Then goto the outer left listbox with the arduino Pins and drag/drop the specif pin on the TAG. For the ultrasonic you have to drag/drop 2 pins on the TAG (one for the trigger pin and one for the echo pin). As already mentioned, when defining a temperature sensor, just one pin has to be dropped on the first sensor. When defining another temperature sensor, the same pin will be used, the pin will be added automatically. Typical for DS18B20 sensors.
When an arduino pin is dragged from the pin list and dropped on the TAG, the pin is not longer available in the pin list and cannot be used for another TAG. To remove a TAG from the I/O list, simply right click on the TAG; a popup is presented with the question to remove the TAG. After removing, the pin will be available again in het pin list box. Be aware; there is not a check on the presence of the removed TAG in UserFiniteStateMachine.h (maybe from version2.6).

In the Finite State list box, new states can be defined by input of the name in the text box and press the "Add" button. When the "Generate new" button is pressed and there are new states defined, a new code block is writen into the UserFiniteStateMachine.h file. See the example code block below of the new defined state "LED-OFF": 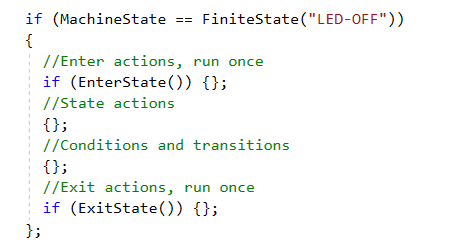 On the right side of the Configurator, is also the box with check buttons for activating of certain software in the AFSM. There are 4 checkboxes at the moment:

Example of a filled Configuration screen 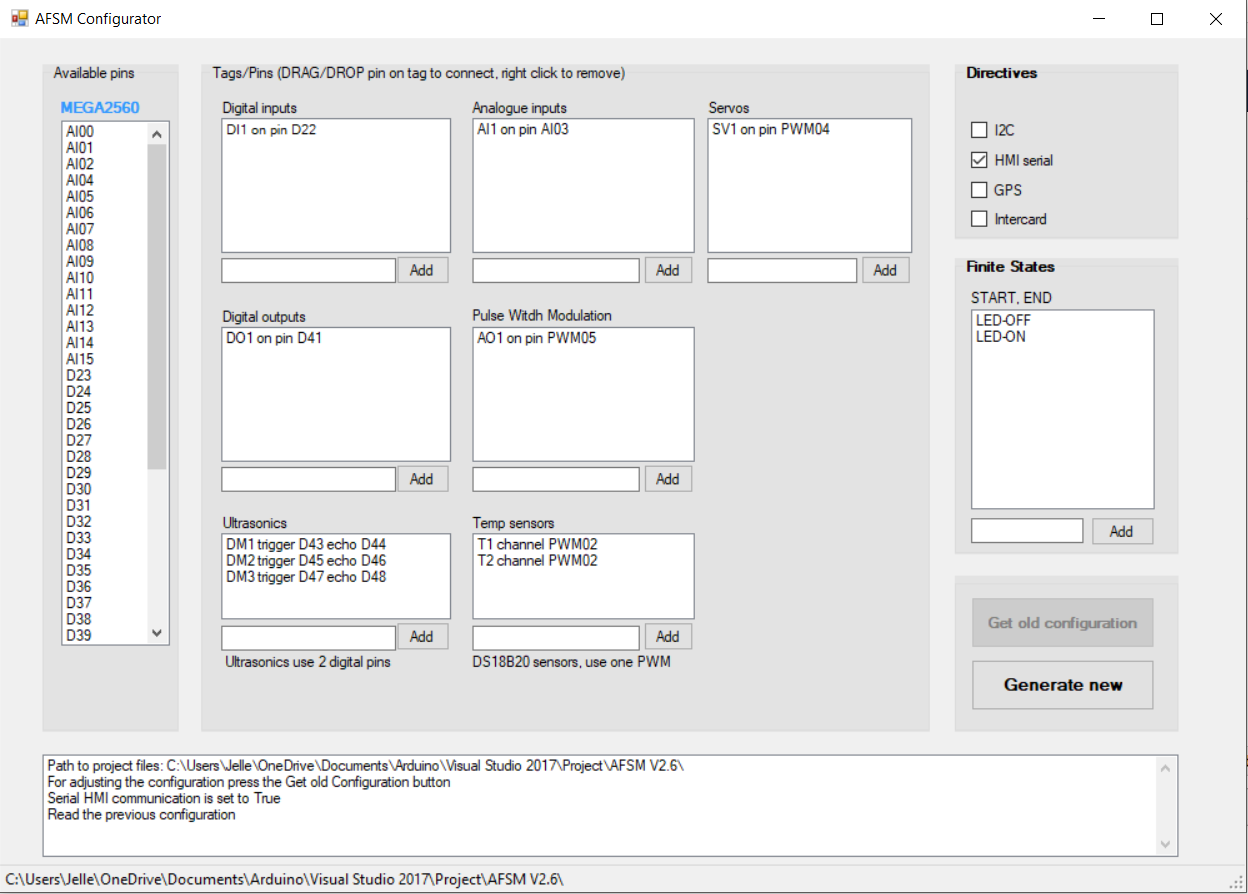 Infact the UserFiniteStateMachine.h contains the code for the machine and you have to edit this file by hand to make beautiful/stable controls.